This challenge is written in Rust. So it is automatically secure, right?

We are given a simple web-application written in Rust using the Actix framework. 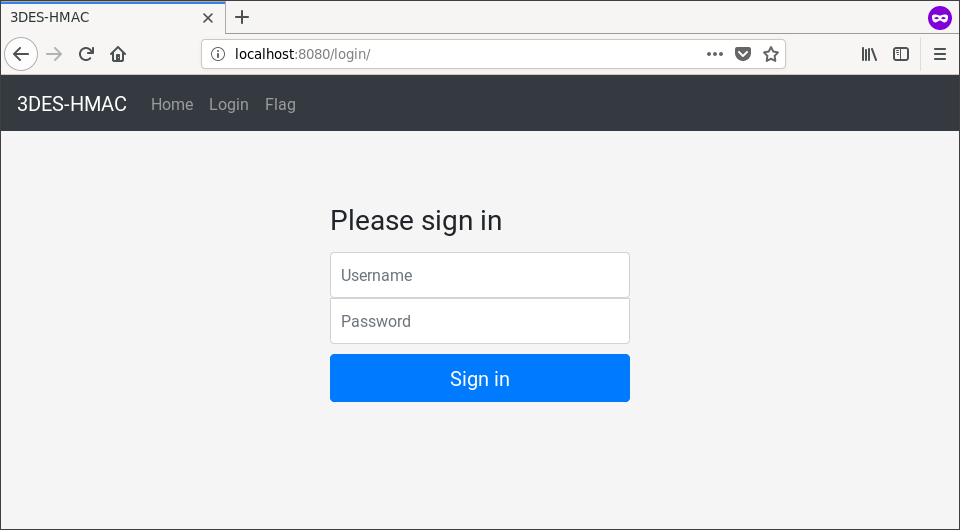 Looking at the server code we find a handler which allows us to retrieve the flag if we are logged in as “almighty_administrator” with the “is_admin” key set to “of_course":

Easy enough, let us just get one of these cookies.

So how do we login? Looking then at the login handler we see that we cannot login as almighty anything and we have laughably few privileges ("is_admin=lol no"):

So we need to somehow forge a cookie ourselves with:

We need to look at bake_cookie, which simply applies a surely-super-legit authenticated encryption to the plaintext cookie and base64 encodes the authenticated ciphertext:

Neither 3DES, nor HMAC

Delving into crypto.rs, we find that auth_encrypt functions as follows:

Clearly there are multiple problems here:

In the remainder of the post, I explore the constituent vulnerabilities in more detail and how to chain them to forge (almost) arbitrary messages. Overall our strategy will be as follows:

Where we apply the length extension attack in step 2.

In order to explain the attack on the unauthenticated 3DES-CBC encryption, let us start by visualising the triple application of CBC. Pictorially decryption of 6 blocks, yielding 3 blocks of plaintext looks as follows: 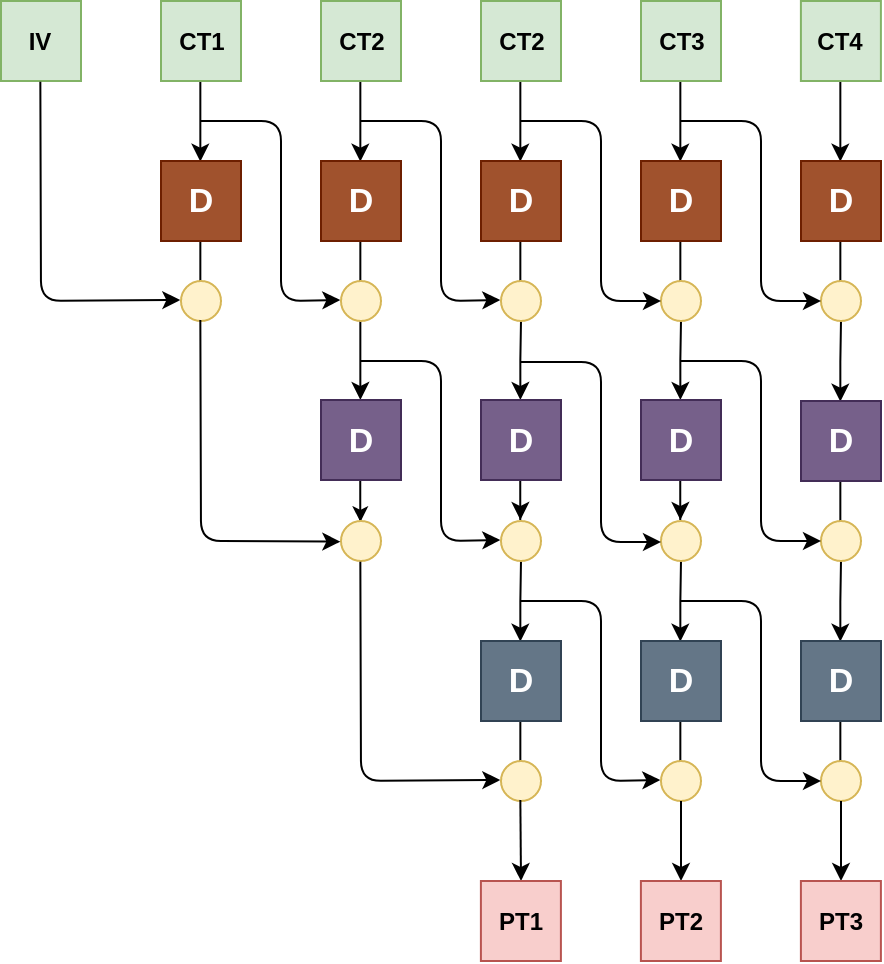 Where the yellow circles represent xor, and the “D” boxes are applications of the DES decryption function under different and (to us) unknown keys. There are 3 initialization vectors nested, one for each layer of encryption, hence the plaintext is only 3 blocks (\(\text{CT1}\) and \(\text{CT2}\) are encrypted IVs).

Now consider what happens if we modify the \(\text{IV}\) block by xoring a value \(\Delta\) into it: then the delta simply “propagates” down the left “stair” and \(\text{PT1}\) becomes \(\Delta \oplus \text{PT1}\). This means that, although we do not know the first block of plaintext, we can xor it with any value of our choosing.

Note that we can apply a similar trick with, e.g. \(\text{CT2}\) to control \(\text{PT3}\), however it will garble the first two blocks of the plaintext in an unpredictable way, since the delta is passed through the block cipher. This is illustrated below: 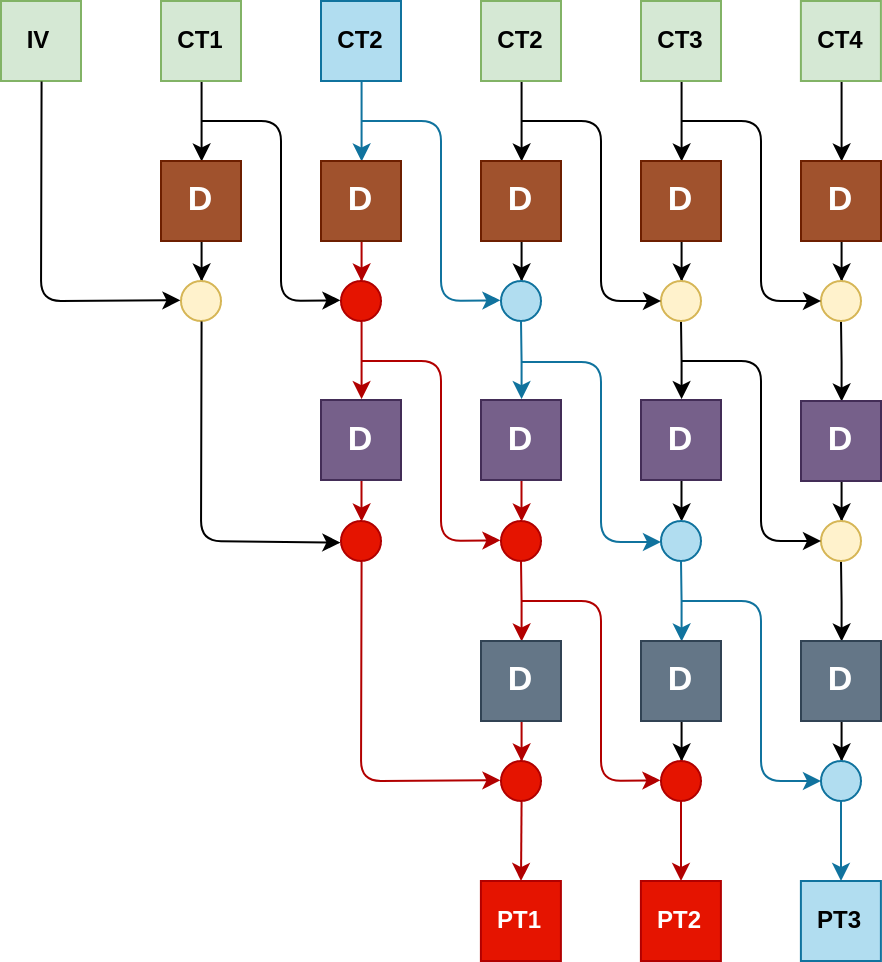 By xoring a \(\Delta\) into \(\text{CT2}\) all the blue values are xored with the same \(\Delta\). However these new values are passed through DES, which is, one would hope, highly non-linear and hence the red values are unknown and completely random to us. Note that this “garbling effect” only travels “backwards” during decryption, in other words: a hypothetical \(\text{PT4}\) would be unaffected in the example above; this will be relevant later when we want to encrypt.

After decryption, the server checks this padding, then removes the padding bytes as determined by inspecting the last byte of the plaintext. If the padding is invalid, the server will close the connection, otherwise it returns a HTML document.

The ability to check this “padding predicate” over the plaintext, coupled with the ability to modify the plaintext as observed before, will allow us to recover the full plaintext: We start by splitting the ciphertext (encrypted cookie), into overlapping 4 block (32 byte) chunks. e.g. in the case above, the 3 chunks would be:

Since we now know the last byte of the plaintext, we can make its value anything by modifying the IV. The trick is to set the known part of the plaintext equal to a truncated padding sequence, in the case of the last byte we make it \x02 and then we begin xoring the second byte of the IV until the server returns “valid padding”, at which point we know that \(\text{P1}_6 = \Delta_6 \oplus 2\). After recovering the second byte, we set it equal to \x03 and continue analogously for the remaining 6 bytes.

Note: There is an annoying case of false positives when recovering the last byte \(\text{P1}_7\), since the message might happen to end with valid padding sequence for a longer padding than a single byte, e.g. if the plaintext is “AAAA\x02\x02\x02W”, then changing W into either 2 and 1 will yield valid padding. This source of error can be eliminated by xoring any value into the second to last byte of the IV after the server reports “valid padding” and checking if the server still returns “valid padding”, if not you have a false positive.

I use my simple CBC-padding oracle library to facilitate this part of the exploit.

So now we have the plaintext, most of which we already knew from the source code…

What we did gain was the message authentication code, recall that it was constructed as follows:

The issue here, is that MD5 is a Merkle-Damgård construction: inside MD5 the message is processed in blocks, by applying a so-called compression-function, which takes:

And returns the new state of the hash (128-bit). I stole this illustration from wikipedia myself:

In the case of MD5 (unlike e.g. the Blake functions), there is no “finalization function” as described above. This means that if we know the hash digest, we can continue applying the compression function with new data!

We use HashPump to facilitate this part of the exploit.

So now we have a cookie with a valid MAC consisting of:

But the server expects an encrypted cookie! Luckily it is easy to turn a CBC-decryption oracle (provided by our exploit + the CBC padding oracle), into an CBC-encryption oracle:

This works because of our previous observation about the garbling only propagating “backwards”; eventually it will “end up in the IVs”.

Putting it all together

With all the components now assembled, we put it together and wait…